Shay Murtagh was recently contracted to design, manufacture, deliver and install three Final Settlement Tanks by C2V+, aCH2M and VolkerStevin joint venture, as part of upgrading the Wastewater Treatment Works in Chorley. Our technical design team completed drawings and 3D renderings for each of the tanks for C2V+ approval.

Shay Murtagh Precast manufactured wall panels and copings for each tank, which when installed measured 43.37m internal diameter and 6m high with launder cast into the walls. The concrete launder was cast onto the main wall panels as a second stage casting, shortly after the wall panels themselves were cast.

The units were delivered to site using our “Just in Time” logistics system, having been stored at our facility until arriving on-site on the day of installation. The Shay Murtagh site crew installed each of the tanks, first pouring a reinforced base comprising on 738m3 of concrete, then following on with the efficient erection of the wall units. The wall units were post-tensioned and ring beam poured at the base. Each of the three tanks passed a ‘7-day water drop test’.

The 43.37m diameter tanks were the first pre-stressed, post-tensioned tanks that C2V+ have installed in the AMP6 framework and the project team were very impressed with the speed the tank walls were erected.

“It was essential that we worked together to enable the logistics of the installation process to work, whilst still maintaining progress on the other critical sections of the project. The project successfully utilised the off-site pre-casting construction of the wall panels to substantially reduce the number of vehicle movements to and from site and as a result the disturbance caused by the works to residents. We look forward to working together with Shay Murtagh going forward through the AMP6 process.” 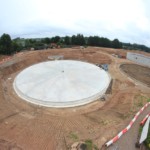 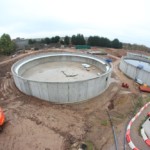 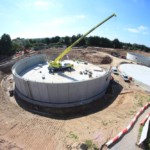 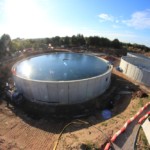 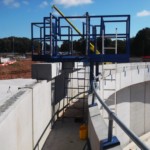 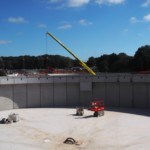 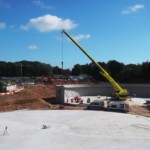