Shay Murtagh Precast recently manufactured a number of precast concrete units for J Murphy & Sons, who were contracted to reconstruct Richmond Street Bridge at Ashton under Lyne. The work was carried out as part of Network Rail’s CP5 Structures LNW North programme, a series of targeted reconstruction and upgrade works to railway bridges in the north west of England. This programme will reduce Network Rail maintenance costs, clear routes for electrification and allow hundreds more trains to run every day and result in faster journey times and new direct services.

Trial erection took place in the factory on 19th August by our highly skilled assembly team. The units were then delivered on schedule to site where installation took place on 28th of August. Richmond Street Bridge was reconstructed by J Murphy & Sons over the last weekend in August. The parapet walls were cast using a form liner with an Insitex Warwick finish to both the track and road sides. The TYE beam and first TY beam were joined together by a second stage casting to create a composite unit weighing more than 86 Tonnes.

As part of the Government’s Norther Powerhouse strategy, investment in the railway infrastructure by Network Rail’s Northern Hub will stimulate economic growth by allowing the cities of the North to work much better together by improving connectivity for freight and commuter services. These benefits will be felt across the North, not only where improvements are made. Improvements to the Northern Infrastructure will help to add over £4.2 billion of wider economic benefits to the North of England, including the costs of the new services, reflecting a return of over four pounds for every pound invested.

We would like to congratulate the J Murphy and Sons team on successful installation and completion of this project and look forward to our next collaboration. 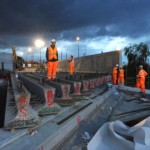 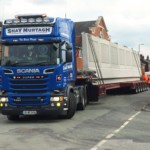 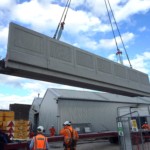 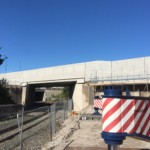 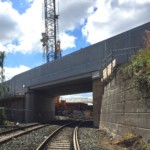 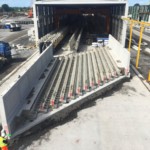 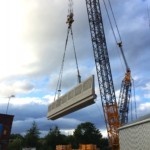